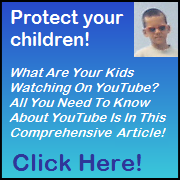 The sex videos I'm talking about are videos that talk maturely about sex. We'll have a look and listen to three videos - two that express their author's views on sex, and one about sex in a Phoenix classroom. The videos start discussions that continue in the comments sections. Watch, then add YOUR comments!

But first, the News. Is there anything new happening on YouTube? Maybe not. At least there's not much movement among the top subscribed members. The Top 16 positions remained exactly the same as last week. The biggest mover in the entire Top 100 chart was Mememolly's 8-spot advance to the number 87 position. When are some new talents going to shake up the Top 100?

I'd like to thank stealurface1976 (Jesse Stutsman) for mentioning me in his Friends Tribute video. I was mentioned in the exact middle of the film, so the video's icon is MY channel icon! Thanks, my friend! Here is that video... (F word warning)

Jacci talks very frankly about "virginity and whores." She thinks that young people should not jump into sexual relations. She goes on to talk about why she doesn't "sleep around" and ends by stating her strong objections to abortion. The discussion continues in the comments; there are over 130 so far. For those of you who have never heard of Jacci before, and wonder about her username, here's a quote from her in this video's comments: "I've explained my user name at least 200 times on here. I used to have a user name on aol that was PurrBox.. but no one thought I was a cat." For more about FW, read these posts.

Kicesie has been making videos that she describes as "Advanced Sex Ed for today's people." In the first vid of this two part series, she states that she respects virgins who are waiting for the right time to have sex. She goes on to talk about the "True Love Waits" campaign and repeats again that it's not uncool to wait to have sex. There's been over 70 comments so far, and over 140 on Part 2; be sure to add yours!

What's going on in Phoenix? Have you seen the TV coverage or read the news about the Williams Field High School teacher who was suspended for performing a "racy" cheer routine in front of her class? The teacher was filmed and the video appeared on the 21superman2169 YouTube channel last week. (No one knows who owns this channel but their YouTube background photo is from a Photobucket account under the name of sad_girl2151). Apparently it was Spirit week and the teacher, also the cheerleading coach, showed a new cheer to her class. Some students responded to the mildly sexy routine with whistles and giggles. Have a look at the video and decide if you think the teach was wrong or not!

Comments:
Good post. If it wasn't for a dull job I don't think I'd watch vids on the web, but I do... loads.