This post will feature a few videos for some YouTube users that I typically don't write about - young children. Children do visit YouTube and parents should be aware of the fact that some perfectly innocent video pages are disgracefully defaced by rude and offensive comments. I'll present two videos here that children might be interested in viewing. Children can watch those videos here without being exposed to the possibility of inappropriate and disturbing comments.

We'll also see the video of a talented female singer and view a discussion on why people make videos and what can come of it, made by two intelligent and entertaining men of YouTube.

First, the news! Have a look at 3 interesting movements on the YouTube Top 100 Weekly Chart. Geriatric1927, who was number ONE right before Lonelygirl15 locked up that spot for months, just dropped out of the Top 10 - into spot 11. Boh3m3 was knocked out of the Top 20, by Linkin Park. Ysabellabrave, despite gaining 324 new subscribers this week, dropped one place - surpassed by My Chemical Romance.

This Week's Featured Video is an orignal song by Jeff Williams (capo420420) with an introduction by the attractive singer, Jennifer Newberry. Check it out!

We'll start off with a really nice cover of this Jackson 5 oldie. It is sung by KazMills, a young lady who lives in London and is a Pop Singer. She has 23 videos which cover pop artists like JoJo, Mariah Carey, Faith Hill and Carrie Underwood. Check her out; she's quite a good singer!


Geriatric1927 and Tom: A Couple of Amateurs

Tom (tlg847) has a video meeting with Peter (Geriatric1927) and records the split-screen result for us to see. They discuss the effect of videomaking on the pop culture and decide that there is great value in the new connections and friendships that have come about. This video is a great example of such a connection; Tom and Peter would not have met and had this conversation were it not for YouTube. Watch this important movie!

This band of pre-teens is a favorite of my 6-year-old nephew! The Naked Brothers Band are "a tweener movie and TV series for Nickleodeon created, written and directed by actress Polly Draper ("thirtysomething") around her sons Nat and Alex Wolff. It's a mockumentary based around the fictional rock stardom of the (actually very musical) brothers. Dad - musician and former "Arsenio" bandleader Michael Wolff - also gets in on the fun as music supervisor and an actor in the show." according to toptensources.com. This song is actually quite catchy. It's been described as bubblegum music for the 21st century. My nephew and I like it! Watch it with your young ones right here rather than on YouTube where they might be exposed to rude comments.


If you can't see the video above, watch it on YouTube. (But beware of nasty comments!)

Here's another catchy tune that's popular with the little ones. It's Bing Bang from the Lazy Town TV show. Parents might like this one too; it's similar to 80s dance songs. Get up and dance, people! Watch it here, no nasty comments to deal with.


If you can't see the video above, watch it on YouTube. (But beware of nasty comments!)

Let's check in with four familiar faces. You've seen these people here on YouTubeStars before. We'll see what they have been up to lately. Since it's Father's Day, we'll start with two gents - stealurface1976 and capo420420. Then we'll visit with two ladies - jennifernew21 and ysabellabrave.


I need a new life by Jesse Stutsman

We'll start off with YouTubeStar stealurface1976. We hope Jesse had a great Father's Day with his girls up in Canada. Despite the title of this song, it seems that things are going well for this talented and popular singer/songwriter. Jesse recently was written about in his local newspaper. Read more about Jesse on his Indie band website. Keep on rockin', Jesse "stealurface1976" Stutsman!

We love YouTubeStar capo420420 because he's a great guitar player, a great guy, and a big promoter of YouTubeStars.com! Jeff always has something cool going on. His Profile Icon Party is up to 138 video responses, making it #84 most responded video of all-time! Jeff just moved up to the number 25 spot of most subscribed Musician of all-time! Now, you can hear tracks from his great new CD, "Art & Emotion" on iTunes. Things are really happening for our friend Jeff "capo420420" Williams! 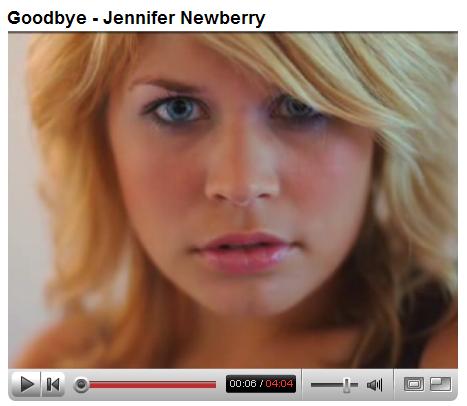 The attractive lady above is YouTubeStar JenniferNew21. Jennifer just released this new video a few days ago. I love this song! Not only does Jennifer sing it with great power and charm, she also co-wrote it! The picture is a screen capture from the first few seconds of the video. Watch it all below. Then subscribe to Jennifer and watch all of her videos! Jennifer "JenniferNew21" Newberry has a bright future ahead of her!

Our friend and YouTubeStar Ysabellabrave rocked out in her latest video. MaryAnne was recently signed to Cordless records so we understand why she's going Crazy! Her joyous reverbed vocals over fuzz guitar make this Prince classic cover a favorite of mine. Don't miss the air guitar at the end! We wish Ysabellabrave all the best in her new recording career!

Here are three entertaining videos by three young women. Esmee sings with Justin Timberlake, Angharad acts all the roles in a skit from a movie that you'll recognize, and Lori interviews people in the street about Happiness.


me singing "what goes around" Justin Timberlake

Last time, I told you about YouTubeStar YsabellaBrave being signed to a recording contract. This time, I report on YouTube sensation EsmeeDenters. Esmee is an 18-year-old woman who lives in a small town in the Netherlands and is one of the most popular videomakers on YouTube. She just moved into the number 8 spot tonight on the YouTube Top 100 Weekly Chart. Last week, it was announced on Esmee's website that she has been signed to Justin Timberlake's just created record label, Tennman Records. In this video, we hear and Esmee sing a Timberlake cover from her upcoming album. This video is less than 2 weeks old and already has over 3 Million Views!

I've been writing about the enjoyable videos from Darahgna (Angharad John) since I first began to write about YouTube over one year ago. The second video I watched on YT was her "Cooking with your Favourite Goth" film. From that time on, I have found her movies to be consistantly charming and entertaining. Now, Angharad has just released her longest and most elaborate video yet - a lipsync of the Cell Block Tango from the movie "Chicago," in which she acts out all of the parts! Each woman in the scene has a different personality and Angharad acts their roles impressively well, even changing costumes as she "sings" each character's lines. Watch and enjoy, and be sure to watch her other videos and new Vlog channel too!

What is Happiness, anyway? Here's theresident out on the streets of New York asking people this very question. The answers are thought-provoking and occasionally funny. Theresident is Lori Harfenist, who has been producing, hosting, editing, and running “The Resident,” which has aired as a half-hour show on cable access in New York, LA, and Chicago. Visit her website for more information on the show. Lori has posted over 80 videos in the last year. Go watch some of the others, too - they are very good!

One of my favorite YouTube singers has some good news to share! I'll help her break the news in this post by starting off with her new video. We'll also watch two thoughtful videos by two up-and-coming YouTubeStars!


Are you ready for a miracle?

It's time to celebrate with our friend YsabellaBrave. MaryAnne announced today on her YouTube talk channel that she has just been signed to Cordless Recordings, an e-label division of Warner Music!!! Here is a link to the story in the L.A. Times that MaryAnne talks about in this video. It was almost 9 months ago that we first told you about YsabellaBrave and her fabulous singing ability. Then, 4 months ago, we told you why YsabellaBrave is a YouTubeStar! Now, as she expands her fan base once again, we are happy to report on this latest development. We continue to wish MaryAnne much success in all that she does!

Here's a first videoblog from an interesting and artistic woman who makes movies under the name of colormeviolet. This video is in two parts. First, Hannah talks about video blogging and responses to her first video. She ends the film with a costume change and a poetry reading. Be sure to watch Hannah's other videos in which she discusses her feelings about depression, family matters, the fragility of life, and this one in which she poses for a sketch artist. Hannah is creative, intelligent, and attractive -- surely the qualities of a YouTubeStar!


how to make the world a better place!

In our last post, I told you about a talented lady named ChrystallineGreen who lives in Belgium. Coincidentally, I just came across another young lady from Belgium who makes YouTube videos under tha name of eveliiine. In this video, Eveline shows off her acting skills as she plays the role of several young people contemplating ways to make the world better. She ends the film by giving a serious and thoughtful answer to this age-old question. Watch the show, then think about what you can do to improve the world!