Last month, I discussed the huge new hit song by Taylor Swift, "Shake It Off". Yesterday, Taylor Swift released a new song from her upcoming new album, 1989. The new personal reflection song, "Out Of The Woods," is a supposedly about her relationship with Harry Styles of One Direction. The video for that song is not out yet, although you can find lyric videos and other videos with the audio, on YouTube. Since we can't bring you an official video of Out Of The Woods, we'll have a look at some of the interesting, cute, funny and insightful Outtake videos that Taylor Swift made to give give a Behind The Scenes look at the making of the Shake It Off video. Taylor put out 8 Outtake videos and we'll look at two today. 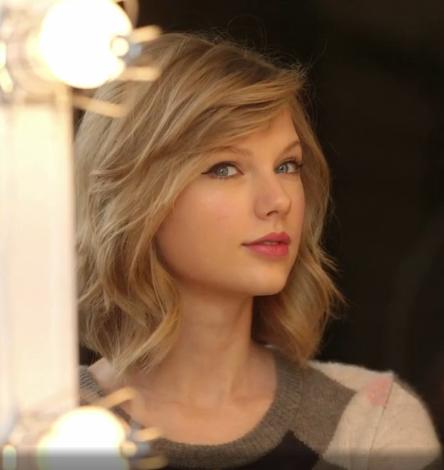 Taylor Swift did an ad for Keds shoes and the picture to the left is from that ad. Click the pic for more about Keds at Amazon.

This video shows the filming of the video that features dancers known as Animators. Animation is a subclass of popping which is a jerky style of dance made up of many quick motions followed by poses. The animator variant is named in reference to stop motion animation popular in the days before computer graphics in adventure and monster movies.

The video starts with Taylor Swift in the most sparkly outfit she has ever worn and a wig so tight that it is giving her a headache. The purpose of the segment is the same as the purpose of the entire video. The idea being put forth is that there will always be others who have something to say about you or who are trying to do things to you. But Taylor Swift's advice is to ignore them, shake it off, and do you own thing. Make the moves up as you go, and totally enjoy yourself! This is not a new point of view. Shakespeare wrote in Hamlet, "Nothing is either good or bad, but thinking makes it so." It's not what happens to you, its how you react -- how you handle it, how you process it, what you do in response.

Taylor Swift finds herself among a trained and practiced group of expert Animator dancers. They execute mind blowing moves flawlessly. Taylor knows that these dancers are very controlled and precise, while all she is capable of is spastic motions. How will she handle this? She performs utterly adorkable dance moves based on whatever pops into her mind! She has this music in her mind saying it's gonna be alright. She may not be as good an Animator as the rest, but she is confident and knows she has other unique abilities, so she enjoys herself and that radiates and lights up the stage! She knows she is awkwardly ruining the great performance of the others but she is proud of her moves just like they are proud of theirs. Have a look and enjoy the Animators, and Taylor Swift doing her own dance moves! This 4 minute video already has 1.5 million views and it a must see for fans of Taylor Swift and fans of the song Shake It Off.

Outtake video #1 was the Cheerleader section. Taylor says that sometimes you feel like you don't fit in. But sometimes you can get everything you want in life without ever feeling like you fit in. The most important thing in life is to dance to the beat of your own drum and to look like you're having more fun than the cool kids! Taylor Swift prepared for the shoot by running to build up her cardio endurance. She had to do three straight days of jumping around! Watch Taylor and the other girls shake their pom poms and do various cheerleader moves including a basket toss where Taylor is caught by three guys; this is one fun video! It is nearly 4 minutes and has nearly 3 million views. 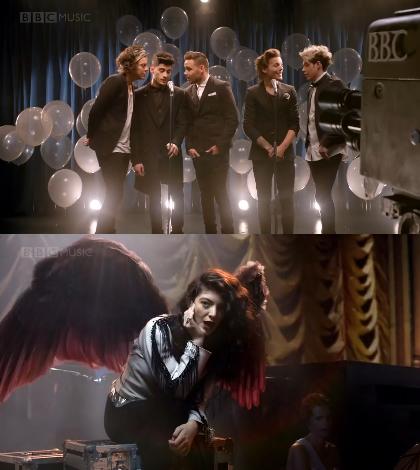 Earlier as I watched "World News Tonight with David Muir" on ABC (which is doing well in ratings), I was happy to see that a large group of Musicians came together to launch the BBC Music website. This group is doing a cover of the 1960s Beach Boys hit, God Only Knows, from their later output in 1966 on their Pet Sounds album which may have inspired The Beatles to create their Sgt Pepper's album. It's nice to see new artists like Pharrell, Lorde and One Direction in the same video as old timers like Brian Wilson from The Beach Boys (and writer of God Only Knows), Brian May from Queen, Elton John and Stevie Wonder. Here's a complete list of everyone in the video, from the BBC Impossible Orchestra page:

How many of these artists do you know? How many are among your favorites? I'll admit to only knowing Dave Grohl, Lorde, Pharrell Williams, Stevie Wonder, Brian Wilson, Kylie Minogue, Chrissie Hynde, One Direction, Elton John, Jools Holland and Brian May. Watch and see how many you can identify!


What are you planning to be for Halloween

this year? Costumes go fast so if you haven't bought or made yours yet, better hop to it! While you are trying on costumes or getting ready for your Halloween

party or if you're just in the mood for something a little eerie and different, watch these slightly creepy and a bit bizarre music videos!

First, we have an Original song by talented Canadian teen girl singer, Hayley Richman. This 15 year old has been on YouTube for 3 years and has done a great job with many cover songs, including 3 with over 100 Thousand views! She also has originals that you can find on iTunes. This original, Marionette, starts off with screechy old dial up modem sounds but then goes into a slightly scary melody that reminds one of "I Put A Spell On You" by Credence Clearwater Revival and others, crossed with some old Torch Song. The video is made to look vintage and is shot in black and white. The props are odd, but the song is hauntingly beautiful - check it out!

Would you believe that there is another original song by a teen girl on YouTube that is also called Marionette? It's true! This one is by Anna-Christin Berger Eskeland who is about 16 and from Norway. Anna has been on YouTube for 2 years and has just 2 videos. You can read more about her, if you can read Norwegian, here. Also here is some info about, and music from her excellent Rock band, 4Adamas. This song, Marionette, has a strong overdriven guitar part and the video is much more colorful but still a bit eerie. Check out this song and video!

We end with Irish Indian singer songwriter Sarah Packiam, who is out with a new EP called Dream. This song is "I Loved You First" and the video features Sarah having various encounters with a hunk of raw meat, all while wearing a mostly unbuttoned white shirt and black bra and panties! The song is a bit melancholy, with a medium tempo guitar track and Sarah's strong singing varying between sultry and angry. Enjoy the song and try to figure out the video, including the scene seen in the thumbnail where Sarah bathes with her side of beef!

Get everything you need for Halloween