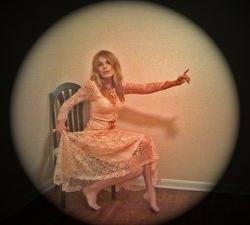 Our favorite YouTube lip-synch sensation who has developed into an actor extraordinaire, Miss CelestialSam has provided this post to tell you all about Aaron Weiss, a musician and freegan. What's a freegan? Read on! Along with her aforementioned qualities, Sam is also a talented writer, and we're always happy to receive posts from her!

Be sure to watch Sam in her latest video, Clairiam (An original poem recitation). I love it; you will too!

How to Change the World

Aaron Weiss, lead singer of the little-known band, mewithoutYou was asked about the changes he'd like to see made in the world. He sincerely and humbly responds with a parable about contentment and how we can never really know what's good or what's bad. He also brings the abstract idea of world peace into perspective and asks, "What about the guy next to you? Do you have love for him?"
Aaron Weiss | Horse Story | State Your Change
Watch this video on YouTube

At the Invisible Children benefit concert at the Troubadour in Los Angeles, Causecast asks participating musicians for the changes they would like to see in the world. Aaron Weiss from mewithoutYou responds.

Have something to say? SAY IT!! Shoot and upload your own video to http://www.causecast.org and tell us. The people have spoken: these are the changes we would like to see!

Aaron Weiss runs his tour bus on 15-20 cents per gallon. How does he do this, you ask? Vegetable oil. When touring, he and his band, mewithoutYou, take restaurant's refuse vegetable oil for free. Aaron explains how his Veggie Bus burns cleaner on this renewable resource and limits dependence on foreign oil.
Aaron Weiss - Veggie Bus
Watch this video on YouTube

Description:
Here's a clip of Aaron Weiss showing the mewithoutYou veggie tour bus. The full version & more is on the DVD: Another World is Possible Vol III - Creation. Co-directed by Shane Claiborne & Jamie Moffett Check it out at: http://awip.us

Aaron Weiss is a freegan, who practices what he preaches, eating discarded food and running his tour bus on waste vegetable oil. Freegans are, in a sense, anti-consumerists living alternative lifestyles that don't promote greed or fuel power hungry corporations. Aaron believes that in order to change the world, one must improve oneself first by setting an example to influence others.
Aaron Weiss(singer for mewithoutyou) interview
Watch this video on YouTube

Description:
this is an interview with Aaron weiss from mewithoutyou

After seeing Aaron in person in Detroit on July 4th, I knew my respect and admiration for this virtuoso was not misplaced. In a world of hypocrisy, Weiss is a shining paradigm of virtue and selflessness. A glass can only spill what it contains; and from Aaron, pours an unparalleled zeal to serve God by glorifying Him with beautifully metaphorical lyrics that he shares with a world in dire need of lessons of morality and brotherly love.

The Fox, the Crow and the Cookie is one of mewithoutYou's such songs on the pitfalls of pride. View it exclusively here: