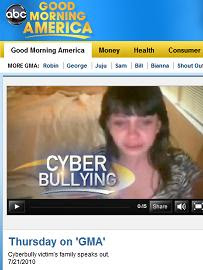 Comments:
I heard Jessi Slaughter was back online already, chatting at xat.com, but her NeonRainbowCupcakes profile is gone now. Her Twitter is suspended too. I hope she is getting the help she needs...

this girl is full of her self! but cyber bullying is bad.
-ashley

Jessi Slaughter is back on YouTube at http://www.youtube.com/user/XxPoisonApplesxX and she is doing a contest. The prize is a shirt she is making herself.