Long time guest blogger, Diana (attractive picture at left), is here to review 4 videos from Super Popular YouTube Star Jenna Mourey, Jenna Marbles! Read what Diana says about this woman who has been making funny and creative skit comedy videos for over 4 years now. Jenna Marbles is very popular, sitting right between female pop singers Rihanna and Katy Perry on the YouTube Top 100 Chart, and Diana will tell you why so many people love Jenna Marbles! 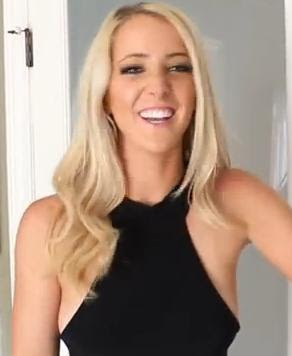 Jenna Mourey is a young youtube comedian star born September 15 in Rochester, NY, who then Later moved to Boston, MA for collage. She went to Suffolk University where she received a BS in Psychology and she also has a masters in Sport Psychology and Counseling. Now she is living in what I like to call Youtube country, Oh you don't know where that is? Well like DUH it's Los Angeles, California.

I thought it would be nice to get to know Jenna by doing an old video first, then one somewhere in the middle and then a newer one. What do you think? Lets watch her grow as a youtuber together! I must warn you, Jenna Marbles is not meant for children or tweens. I would suggest 17+ for watching her videos.

Ok, lets start with one of Jenna's first ever videos, the one that made her want to start making videos and others laugh. Not many people know this but, it's called How to trick people into thinking you're good looking. Its her 7th video listed, but the first one she posted on her friends Dave's blog page. Barstoolsports.com. She loved it so much she wanted to start making more videos. So she started on her own website her friend made for her, Stoollala.com. It was more of a blogging site and although she still blogs here http://jennamarblesblog.com/ her passion is making videos and I for one am glad she has kept doing it. This video alone has 58,748,877 views... YOU GO JENNA MARBLES.

Next, lets go to a video made 2 years later or two years ago, how ever you would like to say it. Oh Hey, it was posted on my birthday so its got to be good!!!

Ok, now I can't say that this is what I do as a morning routine, but it's hella funny and maybe I would have a brighter day if I did?? I can't say I look down when I go to the bathroom and talk about how dapper I look, but the challenge of not touching a zit? Well that I have to say is pretty spot on. :)

I am starting to see why she is so popular; who doesn't love beautiful women who can make fun of themselves?

What Girls Do In The Bathroom In The Morning

What Boys Do In The Bathroom In The Morning

Ok, last I thought I would do her "as of right now" latest video, What A Girl's Eyebrows Mean. Love it. If I was to go all natural, like never wax, I would be so, in her words high fashion, ( In my words dead caterpillars on my forehead look ) But I have gotten them waxed too far apart,(never go to a newbie waxer!) So for 2 weeks I was so "I don't know where I am..." I felt like it too. Is this my face? What happened to my face??

I have had the too thin eyebrows again, tried another newbie waxer hoping cheaper would not hurt me, but do I learn? Noppers. So I guess for 2 weeks I was a VERY picky eater? Well to be honest no matter what my eyebrows look like, I am pretty picky on food!! (SHOULD START ON MY WAXERS NEXT YA THINK???)

What A Girl's Eyebrows Mean