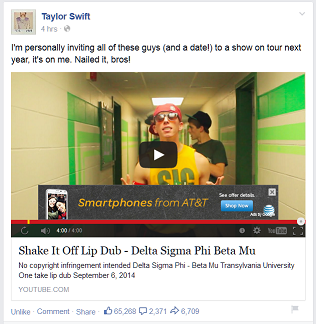 Here's a fun well done lip sync video filmed in one take to Taylor Swift's new hit tune "Shake It Off" made by a fraternity and in support of a charity! The guys of Delta Sigma Phi - Beta Mu chapter at Transylvania University in Lexington Kentucky take turns starring in the flick as they move the party from room to room. But it's not just a good time video, it also helps to publicize a campaign in support of Team Torsie at the Leukemia and Lymphoma Society as they seek to wipe out blood cancer. Check it out, here: http://pages.lightthenight.org/ky/Lexingtn14/TeamTorsie.

And now, the rest of the story! Taylor swift just commented on this video via FaceBook and Google+ saying, "I'm personally inviting all of these guys (and a date!) to a show on tour next year, it's on me. Nailed it, bros!" Wow, how sweet of Taylor Swift! This will bring even more awareness to the Leukemia and Lymphoma Society!

Now watch the guys as they lip sync and dance to Taylor Swift's new hit song, Shake It Off. It already has a half Million views and I bet it goes over a Million this weekend. SHARE THIS and support the Leukemia and Lymphoma Society! Oh, and if you haven't seen the official Taylor Swift video for Shake It Off, you can watch it here.


Taylor Swift song Shake It Off Lip Dub by Delta... by mistersexybuzz

Comments:
Wow, talk about a group of amazing guys! Most of them had it right on key and idk how many people in a group, could do it like that. The timing was spot on....That is also so sweet of Taylor Swift to invite them all. Hope that will be a memory they will all keep, for years to come :-)