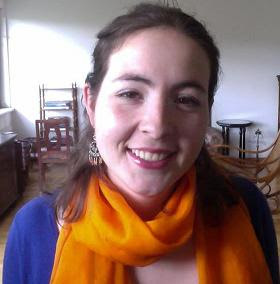 Guest blogger Anna is back with review of a cool channel created by two unlikely friends, Alex and Jim. "What happens when you take a good 'ole, Bible-belt, Mississippi conservative and an urbane, plurilingual, liberal, Euro-German and give them a camera?" Germany vs USA!

Read more reviews by Anna! Check out her last post about The Hunger Games!

As an introduction, here's what their About page says: "Germany vs USA explores the contrasts and joys of two unlikely friends, Jim and Alex, as they learn more about each other's cultures, languages, and the greater friendship between Europe and America. Insightful, whimsical, educational and always genuine (not to mention unscripted) the show aims to bring a slice-of-life perspective to viewers around the world." And now, Anna's article!

Alex and Jim met at the Goethe Institute in Schwäbisch Hall, Germany, where Alex was interning and Jim was taking a german language course. Soon they became friends and founded a language software company and their first youtube channel: walkaboutlanguages. They also started podcasting those episodes on iTunes, making it into the top five educational programs with their healthy mix of information and entertainment. Their rapidly thriving show Germany vs USA and with it their channel had to be shutdown at the peak of its bloom, however, due to irreconcilable differences with the third founder, regarding copyright. Despite the fall-back, they believed in themselves and the concept of the show and bounced back with ardour and creativity, producing exhilarating episodes from different cities of both countries, on their new channel: AlexandJim.

Germany vs USA is a bridge between language and culture addressing a broad range of fascinating topics. It's educational without being too overloaded with information. The episodes are topical and have a freshness and unpredictability to them, which comes from being unscripted. Jim and Alex are knowledgeable, their arguments are smart and well thought through, always backed up with a versatile b-roll, of maps, music, pop up texts and pictures, so it never gets boring. Over the years, they have managed to preserve constant quality with their broadcasts. The show is a bit like Trail Mix, sweet and healthy in an an enjoyable, non-overpowering way and very memorable. I would also compare it a little bit to a Kinder Surprise Eggs (Kinderüberaschungs-Eier) but if they contained a much higher percentage of awesome one-piece collectibles. The episodes they film outside, often in topic relevant locations to the installments, like forests, trains, boats or cafes are especially interesting to watch since they are more likely to have unexpected surprises in them.

Alex, being German represents the arguments for Germany, often wearing striped tops or shirts with logos and sitting on the left on the screen. Jim, on the right, likes to wear caps and speaks for USA. Their arguments are supported by the typically German or American visuals like candy or beer. They are not always from the countries, moreover, they show a range of what is typically consumed there. You can see a little bit of a sneak peak in their catchy intro, with the melodious song 'How s the Wather' by "Come On Go With Us".'Their mascot, Hugo the Frog, who sits next to Jim, is their executive producer, keeping a close eye on the happenings. If you're wondering why there's a football in every episode, it's because their microphone is hidden in it. You have to agree it looks so much better than having a regular microphone stand between them. Both of them get eager about football (which you can see in some of the episodes) and Jim often spends his weekends playing pickup football. I love it most when one of them learns a new fact about the other ones country he never heard of' says Julian Reineke, a viewer of the show. ' Every once in a while they disagree over a difference of how they were raised, and it makes me laugh as much as they do over it. If we were all the same, it would be boring. They have good hearts and they tackle everyday issues without bias. I've learned more than I ever would have thought I could from a simple discussion between friends.' Nancy Reiss (47), another viewer points out in the interactive Germany vs USA Facebook group.

Germany vs USA is watched by a wide range of people who can also contribute by suggesting topics or sharing videos and articles which suit the topics of discussion. 'They're fun but they also deal with things that aren't covered in something like a school class, the little everyday stuff that make up a culture.' Holly Furgason (52) points out. 'The videos are so much fun to watch and remind me of my time in the US, the experiences I had and the discussions with my friends there. They just bring back good memories to me' adds leprechaunishable (25).

Alex would make a great presenter for a Children's Educational Channel but I could also see their show lighten up the boulevard and reality trash possessed TV stations, so I decided to ask them a few questions regarding the future of the show.

1. What are the future plans for Germany vs USA; do you have any goals you want to achieve in the near future?
Answer: . We have been involved with GvU for over 5 years now. Initially, our goals were very lighthearted. We wanted to share. We truly love one another’s culture and are very close friends from very different backgrounds. It made for a great platform. Now that we see the community grow, we feel that we owe it to them to have more focused goals. That is one reason why we have been releasing episodes for more than a year without a break. Our next step is to branch out and give the community a larger platform to enjoy GvU. We want to provide them with an opportunity to share their experiences and stories. That is what makes traveling and culture so wonderful. The new. We hope to accomplish that in 2015.

2. If a TV station offered you a format, provided they would leave you with the same liberty you have in producing the episodes, would you consider it or do you guys want to keep it limited to YouTube?
Answer: The initial response is absolutely! Though, we have both been involved in projects where external factors led us into directions we didn’t want to go. Even though that was never the intention. So, I think if the situation was correct we would consider it. But do people still have TV?

3. How much research and preparation does each episode take (I assume it varies but roughly)
Answer: It does vary. We like to be slightly prepared but not over researched. We won’t talk about an experience if we haven’t had it. And we don’t like to discuss our knowledge or thoughts before we shoot. We try to really pull from an authentic conversational circumstance. A lot of times we are talking for close to an hour, if not over, and then have to cut it way down.

I did not know they filmed this long but I'm glad because what they end up selecting is wonderful. Last but not least, 'they show differences you only recognize if you know both cultures and countries well, not so as a mere tourist. They also represent both sides as being friends. It is a very nice, informing and non-aggressive way to teach about cultural differences.' Kauderwelsch77 (39) points out. We wish them best of luck with the show and hope that the love and dedication that is put into each episode, pays off.

Comments:
Alex and Jim were funny as heck in those videos. I love the fact that they are from two totally different parts of the world, and yet are the best of friends, AND that they do these videos for "our" education. My favorite one in this post, is the one where they talk about what gets under their skin. I agree with Alex, with the plates being taken away. It makes me feel "out of place" when I sit without a plate, while others are still eating. If it doesn't bother us to have it there, then leave it alone, sheesh! Lol, it cracked me up with Jim talking about bells. I would probably jump every time I heard one.