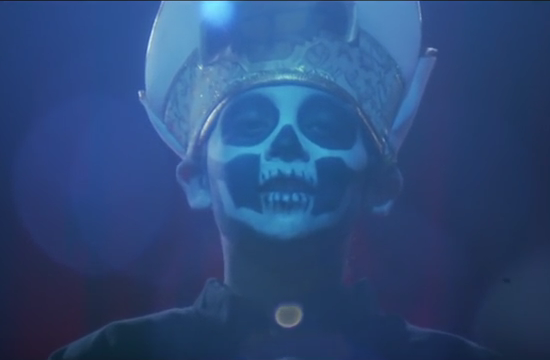 So guess who was recently at a festival in my area? BABYMETAL!
I recently wrote about their US television debut, performing "Gimme Chocolate!" So when they were here for Carolina Rebellion, I thought I'd check YouTube for some concert footage. In the related videos to the right, I noticed another band that was at the show, called Ghost.

Ghost (a.k.a. Ghost B.C.) is a Swedish rock/metal/doom band who are touring in promoting their third full length album, Meliora (link at left). They have something in common with BabyMetal. BabyMetal combines Metal and Thrash musical stylings with the theater presentation of J-Pop. Ghost combines the musical styles of Rock and Doom with the theatrical shock value of a Satanic Cult. All the members wear the same black robe and plastic devil face mask, and are known as Nameless Ghouls. The exception is the singer who dresses like the anti-pope and goes by the name of Papa Emeritus.

So what do they sound like? There is a definite influence of Blue Oyster Cult, KISS, Pink Floyd and Alice Cooper. They sound like BOC and Pink Floyd mixed with Black Sabbath, but they look like KISS in that their identities are hidden. They borrow from the Horror themes of Alice Cooper but dress alike like Devo.

Let's discuss and watch their Official Video for Cirice. This song won them the 2016 Grammy Award for Best Metal Performance! Here are some lyrics, to give you an idea of what it's about...
I feel your presence amongst us.
I know your soul is not tainted, Even though you’ve been told so.
I can feel the thunder that’s breaking in your heart; I can see through the scars inside you!
You and I see eye to eye.
Now there is nothing between us. From now our merge is eternal.
Can’t you see that you’re lost? Can’t you see that you’re lost without me?

It is clear that the singer is forging a connection, a bond, with the listener. The listener is told that they are part of the group, they are understood, they are in a place where they should be. Without this in their life, they are lost. Notice that cults and, some will say, religions work to perform this psychological function in people's lives. They make them feel like part of a tight group where they are wanted and if they depart, their life will be devoid of meaning, left in Hell on Earth or perhaps eternal fires of damnation. Heavy subject matter but something to think about!

The video starts with Cirice, about 11 or 12, and her mom entering a school to watch a talent show. They were late and have to sit in the front row. Cirice looks less than interested in the acts, until Ghost comes out to play. The crowd is uncomfortable except for one couple who look slightly demonic; possibly the parents of Papa Emeritus, who is now singing directly to Cirice. She instantly feels a connection, and stands hand in hand with Papa as her mom tried to pull them apart. She succeeds but then when the MC tries to attack Papa, Cirice exhibits powers that are similar to those of movie icon Carrie who has a similar sounding name. All Hell breaks loose!

So is this an Award Winning Metal Performance or the work of The Devil himself? Have a look and decide for yourself!

Now if you thought that was Satanic, evil and creepily disconcerting... let's go back 50 years to the groovy 60s when the Hippies were singing about Love and Flowers. Not everyone was so happy. There was a man named Jason Crest who related his experience at a terrifying Black Mass.

Let there be light; stop these sounds! ahhhhh Black Mass-s-s-s-s-s. Heavy organ music, creepy evil lyrics and chanting, and a backwards percussion track might give you nightmares. Have a listen to "Black Mass" by Jason Crest, and ponder on whether this old slice of demonic horror from the swingin' 60s outdoes the new Satanic Ghost band or not!