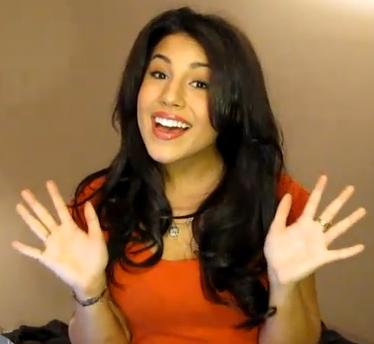 This post is written by Guest Blogger Christina Amato. Christina is a talented YouTube singer from Las Vegas whose videos we have Featured many times on our Top 100 Weekly Chart. That pretty woman at the left is Christina! :-) Click the pic to watch the video it came from - "Trey Songz - Can't be Friends (request)"

Christina's YouTube channel is anitsirhcmarie which is her first name spelled backwards and her middle name. Visit her channel and watch some of the 89 videos she has uploaded. Christina has nearly 3 Thousand Subscribers and almost Half a Million Total Video Views!

My favorite videos by Christina include her covers of Jason DeRulo's Ridin' Solo and Leonard Cohen's Hallelujah. Subscribe to Christina's channel and see what songs she sings in the future!

Christina's reviews are below...

We have just interviewed Krista Nicole! KristaHeartzuz)! The interview will be posted here any day now. [It is here now!] When we post the interview, we will also do a CONTEST! We will Give Away 10 AUTOGRAPHED Copies of Krista's new 4 song EP/CD titled "Dreams" - produced by Tyler Ward. Click the pic to hear Krista talk about the CD. Krista has been singing on YouTube for 4 years now and has nearly 80 Thousand Subscribers! Check back soon for the Interview and Contest!


This video features the young and very talented singer, Celica Westbrook. Celica is shown in the studio performing her haunting Twilight-inspired original song entitled "New Moon." Celica's soulful and emotional voice is accentuated by professional camera work and top-notch sound quality, making the video much more enjoyable to watch. "New Moon" is a Twilight-inspired ballad written by Celica's mother, Amy Westbrook. The song sounds like it belongs in the soundtrack with its melodic crescendos, mysterious lyrics, masterful production and Celica's clear and powerful delivery. This talented young beauty has other videos uploaded to her YouTube channel, including covers of popular songs and more original material. I foresee many great things happening in Celica's future, and I wish her the best of luck! :)

This A cappella cover of the classic Luther Vandross song, "Superstar" is performed by the very talented Marcus Marshall. His simple yet soulful execution of this classic tune makes it clear that he has an understanding of both the song and his voice. Marcus is a very talented singer-songwriter from Las Vegas, Nevada. He is a long-time friend of the very successful YouTuber, Erika David, and has even written many of the songs on her demo. There is no where to go but up for Mr. Marshall, and I wish him the best of luck.

There are many adjectives I could use to describe Maxine Ashley. The first few that come to mind are beautiful, talented, confident, and quirky. It was hard to choose a video of hers to review, because they're all so unique. Ultimately, I decided on her cover of "Unthinkable" by Alicia Keys because of her convincing and soulful delivery. Maxine has recently contributed vocals on Alex Gaudino's summer smash-hit, "I'm In Love (Vocal Version)" and has quickly been gaining exposure. I see big things in Maxine's future - Good luck!

This is one of my favorite YouTube finds as of late. I was so surprised by this boy's voice, that my jaw literally dropped. Conor Maynard is a very talented young man from the UK, whose unexpected gritty and soulful voice has been rapidly gaining attention in the YouTube community. I can't get enough of his voice - or this video! Enjoy!

Comments:
This comment has been removed by a blog administrator.

I really appreciate your post and you explain each and every point very well.Thanks for sharing this information.And I’ll love to read your next post too.