Here are the latest stats on the viral video hit "Friday" - sung by 13 year old Rebecca Black, and written and produced by Patrice Wilson, Clarence Jey and Maverik. The video is about to hit 55 MILLION views. The song is at #13 on the iTunes Chart , ahead of Cee Lo Green, Britney Spears, Pink, Avril Lavigne, Diddy, Katy Perry and Bruno Mars.

The video has about a million Likes and DisLikes - about 9 DisLikes for every Like. The comments are in about the same ratio. Why so many negative comments? Maybe "herd mentality", maybe Schadenfreude, maybe honest﻿ opinions. In any case, it is very interesting to watch this Sociological phenomenon.

What do we know now about ARK Music Factory? Yesterday, ARK started a new YouTube channel, ArkMusicFactory300. The first video on this channel is a 6 minute interview with Ark owner Patrice Wilson. Patrice talks about his European background, what Ark is, how much they sometimes charge to make a video, how their goal is to make catchy pop music and their plans for the future. Ark will be going out to different places, holding auditions, and looking for the next viral video star. His final comment is that you should follow your dream, no matter what anyone says.

Patrice says not all artists pay for their videos, and the ones that do pay are charged $2000 to $4000, which is a good price for all they get - a song, video, photo shoot, image consultation and promotion. What a musician pays for their song and video package depends on if they elect the "Full 360" or the "Partial 360" plan. Rebecca Black paid for her video and got all rights to it. The song is marketed on iTunes as ©Rebecca Black, which means she should get all of the 70 cents per sale that iTunes pays the artist. From that amount, she may have to pay Patrice and Ark 9.1 cents per sale for a "mechanical license" or there may be some other agreement of payment to Patrice and the writers of the song. Other artists might choose to pay nothing for their song and video, but they may have to assign all rights to Ark. By the way, on her Jay Leno interview at 5:20, Rebecca Black said she will be giving some of her profits to her school and to help Japan.


As for the song itself, it is true that the lyrics don't rhyme and they are a bit cheesy. But they were written mainly for a tween and pre-tween audience and were intended to be fun and wholesome. Who says all lyrics have to rhyme and make absolute sense or be deep and profound? The goal of Ark was to create a catchy fun song, and it can be argued that they succeeded in this!

One last observation... "Here's another clue for you all"... After the title shot, the very next image in the "Friday" video by Rebecca Black references the song, "Another Pleasant Valley Sunday". Pause it at 3 seconds and see. What does this mean? Maybe the producers of Friday were giving a wink to those in the know - they realized their song could be seen as another "satirical commentary on middle-class society"..... 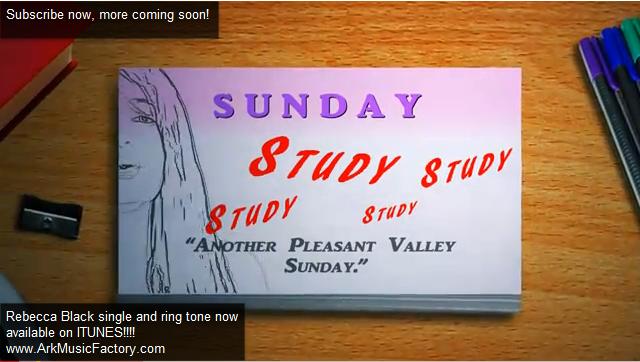 The local rock group down the street
Is trying hard to learn their song
Seranade the weekend squire, who just came out to mow his lawn

See Mrs. Gray she's proud today because her roses are in bloom
Mr. Green he's so serene, He's got a t.v. in every room

Creature comfort goals
They only numb my soul and make it hard for me to see
My thoughts all seem to stray, to places far away
I need a change of scenery

Here are a few videos related to Friday by Rebecca Back:


'Friday Too' (based on 'Friday' by Rebecca Black) - AlFord Acoustic Cover

Here is a touching song by a really nice guy and talented musician. It is based on the Friday lyrics, but sung from the perspective of someone who is either shunned or bullied. It describes how it feels to he hated. This is the comment I left on this video at YouTube:

Interesting variation on the Friday song. I'm a supporter of Rebecca Black and ARK Music Factory. I think the song is catchy and realize it's targeted at tweens and younger who really like it. I've heard from parents who like it too because the﻿ lyrics are wholesome. Who says every song has to have deep rhyming lyrics? Its a fun song,﻿ Rebecca sings it well, the video is well made. If a person doesn't like it, of course that's their right, but why attack an 8th grader the way some have?

Michael Buckley does a comedy series on his WhatTheBuckShow channel. Here, he talks about how he is obsessed with the song and video. He says that when a video goes viral, you have to have a thought something like "what just happened?" after you see it. He appreciates the non-sexual content where kids are just having fun. "Low brow brilliant!" "A cute little anthem for kids!" "You made my day!"

Stand up comedian Kyle Cease gives encouragement to Rebecca Black. He says reactions like this come with success. He says their anger is not directed at Rebecca, they are just trying to find a place to direct it. "It's so much easier to knock down other people's building than to build your own." "What does 'best' or 'worst' even mean? It's just an opinion." A very insightful video; check it out!


MORE Links from people who have been visiting the chat room at ArkMusicFactory. This list is a continuation of the list I started, here.