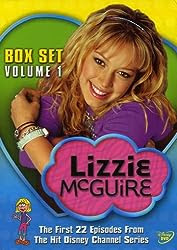 Once Upon A Time, there was a girl named Lizzie McGuire. Lizzie was a teen girl who was sweet but shy and a little klutzy. She had a little brother she often fought with, named Matt. They lived a typical middle class American life along with their mom and dad, who just happened to look like that guy in Revenge of the Nerds

. She had a Mexican-American BFF named Miranda and a boy best friend since they were babies named Gordo. This good girl and her nice friends and family got into funny situations with happy endings for three years - then they were gone.

Once Upon A Time, there was a girl named Hilary Duff. She was born and raised in Texas where she took acting, singing and dance classes with her older sister Haylie. Disney found her and made her a teen idol in a very popular show about a sweet, shy, clumsy girl and her friends and family. Hilary also had a successful singing career, with hits like "So Yesterday," and "Our Lips Are Sealed" with sister Haylie. Hilary continued in the public eye in several movie and TV roles. She has never really been gone, but she was less visible as she did other things in her life including starting a clothes line, writing a trilogy, taking up charitable causes, marrying, having a son and separating.

Look who's back with the one of the most watched videos on YouTube last week! It's Lizzie McGuire! I mean, it's Hilary Duff! Hilary has a new song called "Chasing the Sun

" from her fifth album. The song and video were released on June 29th, and the video already has 15 Million views! This is a catchy summer tune with a funny music video in which cubicle worker Hilary daydreams about fun in the sun while things go wrong in the office. Check out this great summer video hit!

I thought the music video was well done and humorous, but there is also a Bloopers video! Have a laugh when things go wrong in the shooting of the Hilary Duff music video "Chasing the Sun