Here is something you should see. President Obama was just interviewed by three YouTubeStars, so of course we had to cover it! This is not a typical three minute video. Invest 45 minutes of your time to see what issues these YouTube Stars asked President Obama about.

The first third of the video is the interview by Hank Green of President Obama. Hank Green is half of the popular YouTube channel vlogbrothers which he does with brother and author John Green who wrote, The Fault In Our Stars. Hank created VidCon, Project For Awesome, and DFTBA Records. Here are the issues Hank covered: State of the Union speech, Lobbyists, Drones, North Korea, Marijuana, Obama Care.

Next up was GloZell Green. Interesting that the first two interviewers have the last name of Green. Green energy is a hot topic in the Obama Administration. GloZell's popular YouTube Channel consists of comedy and song parody videos. She has also released a few music singles. GloZell covered these issues: Cyber Security, Police and African American males, Cuba, Same Sex Marriage, Obama's Legacy. Memorable lines from GloZell include, "Castro - the guy puts Dick in Dictatorship" and "I have green lipsticks, one for your First Wife."

The final interviewer was 19 year old Bethany Mota who has been vlogging on her YouTube Channel since she was just 13 years old. She became popular for her haul videos where she talks about, and shows off, things she got from various stores; as well as hair and makeup tutorials. Bethany was also on Dancing With The Stars in Season 19. She was bullied as a young teen and that came up in one of her questions. Bethany covered these issues: College affordability, Cyber Bullying, Boko Haram, Chinese internal internet restrictions, why should young people be interested in politics. Very good answer from Obama, at around the 40 minute mark, on relating politics to how every day people negotiate, spend money, make decisions, compromise, try to live together, treat each other with kindness, look after one another, how are we fair to one another. Bethany ends with a lightning round, where we find out that President Obama watches a lot of sports on TV when he has time, Obama wanted to be an architect or an NBA player when he was young, and Obama would like the super power of flying or would like to be able to speak any language. With Google Translate, this is almost possible! The video ends with the obligatory group selfie!

Here is the video! Watch it and share it with your friends. The SHARE button is at the bottom of this post. Consider having a discussion about any of these issues with your friends and you may also want to comment on the video. The three minute funny, cute or music related videos are great, but issues videos are important too!

One of the coolest dance tunes of the 80s is back on the radio! "What I Like About You" was originally recorded by The Romantics, and has been recently covered by Five Seconds Of Summer. Here are both videos along with some trivia about the song! 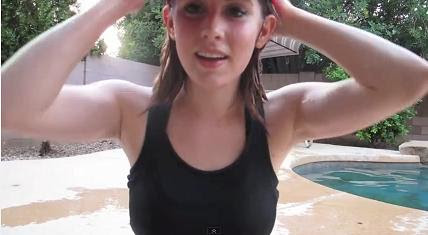